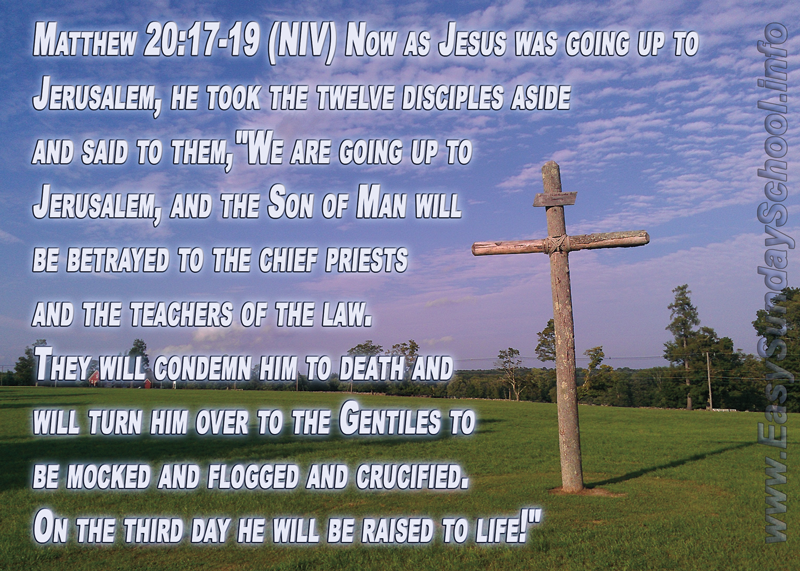 The "Road to Easter" is, in a very literal way, the road to Jerusalem, and begins with Jesus telling the 12 what will happen. In Mark 10:32 (NIV) we read, "They were on their way up to Jerusalem, with Jesus leading the way, and the disciples were astonished, while those who followed were afraid. Again he took the Twelve aside and told them what was going to happen to him."  It is important to note that even though this was the 3rd time Jesus told him his "fate", they were astonished and afraid.  Astonished because their understanding of what Jesus' mission as the Christ was flawed, even though he had taken 3 years to teach them. Afraid, because they were human, and their faith was week.  This is instructive for all of us because even though we know Jesus was fully human, out knowledge of him also being fully God can get in the way of understanding what happened and what it meant to die on the cross; however, the 12 were fully human and they erred.  It is in some ways comforting to realize that even those who were his closest brothers and students, who lived with him for 12 years, made mistakes and didn't always get it right.

Unit Verse: Matthew 20:17-19 (NIV) Now as Jesus was going up to Jerusalem, he took the twelve disciples aside and said to them,"We are going up to Jerusalem, and the Son of Man will be betrayed to the chief priests and the teachers of the law. They will condemn him to death and will turn him over to the Gentiles to be mocked and flogged and crucified. On the third day he will be raised to life!"

Name of Game: What Would You Give Away?
Equipment:

. I use colored ones, so I know by a glance what they meaning of each card is, because of a color code, but is is not necessary to the game.
b) Some marker to write with, large enough print for all children to read.
c) Someone to interview students before class as they come in, and to record answers.

How to Play the Game:
a) Have 1 or more people ask each student 2 questions, writing the answers on color coded cards if you are using them. The 2 questions are always the same.  What would you Give Up and What would you NOT Give Up.  For Example:

1) Question 1 on Pink or Orange cards: What would you give up or give away to someone without hesitation.  If they say anything, seek deeper, making sure they know they will never get it back.  This is not a morality play, but a real question.  Like, would you give your cat or x-box away?
2) Question 2 on the Yellow or Green cards: What would you NOT or Never give away.  Same thing, if they give crazy answers or difficult to believe answers, keep asking questions.

b)  Once you have enough cards (Keep them and add to them each week - you can even even make up some answers so you have enough, before you start classes this cycle) put one child in the middle of the room in a chair, pick a card at random, and have the other children ask 20 Questions, trying to guess what is on the card.  DO NOT TELL them about the color code (if used) ever, and do not even concern yourself with it, until the game is over.  If they do not guess what is on the card, in 20 questions, the person is middle wins and selects the next student to sit in the chair.  If they do guess it, the person who guesses it is the winner, and sits in the chair. Keep the card that was used, and pick on at random or what appears to be random, and give it to the new player.
Repeat until you have run out of time or it is time to start regular class.

Purpose: Teach the students “We are going up to Jerusalem” was something that Jesus knew was the right thing to do, even though he knew it was going to hurt, yet he did it anyway. Mark 10:32 (NIV) says "Again he took the Twelve aside and told them what was going to happen to him," demonstrating that he clearly knew the end game.

4a) Supplies: You will need a Bible, and someone to read it and someone who does not mind people laughing as they "Act."  Normally, in the first week, I am the "fool" acting, and another adult or teen reads, and we move toward the students taking both rolls as the unit unfolds.

4b) How to Play: Some will read these verses, stopping every line or so:

Matthew 21:1-11 (NIV) As they approached Jerusalem and came to Bethphage on the Mount of Olives, Jesus sent two disciples, saying to them, “Go to the village ahead of you, and at once you will find a donkey tied there, with her colt by her. Untie them and bring them to me. If anyone says anything to you, say that the Lord needs them, and he will send them right away.”

This took place to fulfill what was spoken through the prophet:

“Say to Daughter Zion,
‘See, your king comes to you,
gentle and riding on a donkey,
and on a colt, the foal of a donkey.’”
The disciples went and did as Jesus had instructed them. They brought the donkey and the colt and placed their cloaks on them for Jesus to sit on. 8 A very large crowd spread their cloaks on the road, while others cut branches from the trees and spread them on the road. 9 The crowds that went ahead of him and those that followed shouted,

“Hosanna[b] to the Son of David!”
“Blessed is he who comes in the name of the Lord!”[c]
“Hosanna[d] in the highest heaven!”
When Jesus entered Jerusalem, the whole city was stirred and asked, “Who is this?”

When they pause, the "Actor," YOU, interpret the verse by acting it out and perhaps paraphrasing it in children's speak.

4c) Debrief the Game: Ask them what they learned from the story?  Let them talk, then read them the entire unit verse:

Matthew 20:17-19 (NIV) Now as Jesus was going up to Jerusalem, he took the twelve disciples aside and said to them,"We are going up to Jerusalem, and the Son of Man will be betrayed to the chief priests and the teachers of the law. They will condemn him to death and will turn him over to the Gentiles to be mocked and flogged and crucified. On the third day he will be raised to life!"

Finally, ask them what "the right thing" is in their life that they might not want to do or give up.  Lead them as they talk.

5) Summary - Read the verse again, and ask what the whole thing means.  Help them come to understanding each time a child asks any question.
This is your chance to make sure they know the wonder of the scripture and the power of God's love, so follow your calling, being a teacher.  The Spirit is within you and with you; Just go with it.