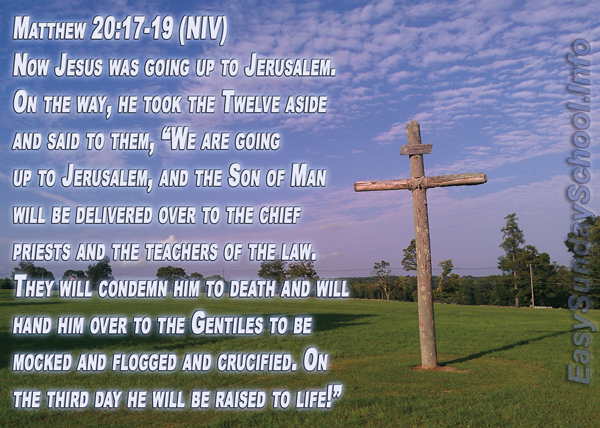 The "Road to Easter" is, in a very literal way, the road to Jerusalem, and begins with Jesus telling the 12 what will happen. In Mark 10:32 (NIV) we read, "They were on their way up to Jerusalem, with Jesus leading the way, and the disciples were astonished, while those who followed were afraid. Again he took the Twelve aside and told them what was going to happen to him."  It is important to note that even though this was the 3rd time Jesus told him his "fate", they were astonished and afraid.  Astonished because their understanding of what Jesus' mission as the Christ was flawed, even though he had taken 3 years to teach them. Afraid, because they were human, and their faith was week.  This is instructive for all of us because even though we know Jesus was fully human, out knowledge of him also being fully God can get in the way of understanding what happened and what it meant to die on the cross; however, the 12 were fully human and they erred.  It is in some ways comforting to realize that even those who were his closest brothers and students, who lived with him for 12 years, made mistakes and didn't always get it right.

Unit Verse: Matthew 20:17-19 (NIV) Now as Jesus was going up to Jerusalem, he took the twelve disciples aside and said to them,"We are going up to Jerusalem, and the Son of Man will be betrayed to the chief priests and the teachers of the law. They will condemn him to death and will turn him over to the Gentiles to be mocked and flogged and crucified. On the third day he will be raised to life!"

Name of Game: What Would You Give Away?
Equipment:

. I use colored ones, so I know by a glance what they meaning of each card is, because of a color code, but is is not necessary to the game.
b) Some marker to write with, large enough print for all children to read.
c) Someone to interview students before class as they come in, and to record answers.

How to Play the Game:
a) Have 1 or more people ask each student 2 questions, writing the answers on color coded cards if you are using them. The 2 questions are always the same.  What would you Give Up and What would you NOT Give Up.  For Example:

1) Question 1 on Pink or Orange cards: What would you give up or give away to someone without hesitation.  If they say anything, seek deeper, making sure they know they will never get it back.  This is not a morality play, but a real question.  Like, would you give your cat or x-box away?
2) Question 2 on the Yellow or Green cards: What would you NOT or Never give away.  Same thing, if they give crazy answers or difficult to believe answers, keep asking questions.

b)  Once you have enough cards (Keep them and add to them each week - you can even even make up some answers so you have enough, before you start classes this cycle) put one child in the middle of the room in a chair, pick a card at random, and have the other children ask 20 Questions, trying to guess what is on the card.  DO NOT TELL them about the color code (if used) ever, and do not even concern yourself with it, until the game is over.  If they do not guess what is on the card, in 20 questions, the person is middle wins and selects the next student to sit in the chair.  If they do guess it, the person who guesses it is the winner, and sits in the chair. Keep the card that was used, and pick on at random or what appears to be random, and give it to the new player.
Repeat until you have run out of time or it is time to start regular class.

Purpose: Teach the students “mocked and flogged and crucified” really means, so they understand what Jesus really suffered and gave up.

Many years ago, a friend sat me down in a Subway to explain to me the depth of the gift, not so much the Grace, but the cost of the Grace, before I had committed my life to Jesus.  This is more or less what he said.  I would either read this to them, or tell it your own way, but the SHOCK of it is Christ Crucified, so don't soften it.

When they arrested Jesus, he was was a poor man, at the mercy of the strongest empire that has even now ever existed, and 2000 years ago, death by any means and torture was a common day occurrence.  Jesus knew he was going to die and be beaten nearly to death, and he knew exactly how.  He didn't need to be God, though he was, to know how. Everyone in Judea had seen Crucifixion and flogging, and they all knew how it went.

So, the would have stripped Jesus or nearly so, and tied him to a post or stand, and then taken a whip, made of twisted leather with steel, lead and glass tied and woven into the leather, and hit him with massive force 39 times, because it was believed that 40 would kill any man. Frequently, 39 did as well.  As the whipped him, the skin of his back would have been peeled off, exposing the ribs and even the spin, and blood would have been everywhere. His body would have been destroyed robbing him of the ability to even stand perhaps.

Then they took a woolen cape and put it one him, mocking him as a king.  The problem with wool is that it absorbs fluid, like water and blood.  So when he was wearing the cape, it would have been sucked into the wounds, like a giant total body band aid.  Then they ripped it off.

That was just the flogging.  They had yet to spike him to a cross.

This is the nature of what Jesus did for YOU. He did it on purpose.  He did it knowing what it would feel like. He was not happy about it, but he did it.  Then he died.

4a) Supplies: You will need a Bible, and someone to read it and someone who does not mind people laughing as they "Act."  Normally, in the first week, I am the "fool" acting, and another adult or teen reads, and we move toward the students taking both rolls as the unit unfolds.

4b) How to Play: Some will read these verses, stopping every line or so: DO NOT OVER ACT,  CHANGE YOUR VOICE, AS NEEDED, TO AWE, SOMBER, INFORMATIVE AND QUITE.

Jesus Delivered to Be Crucified
19 Then Pilate took Jesus and flogged him. 2 And the soldiers twisted together a crown of thorns and put it on his head and arrayed him in a purple robe. 3 They came up to him, saying, “Hail, King of the Jews!” and struck him with their hands. 4 Pilate went out again and said to them, “See, I am bringing him out to you that you may know that I find no guilt in him.” 5 So Jesus came out, wearing the crown of thorns and the purple robe. Pilate said to them, “Behold the man!” 6 When the chief priests and the officers saw him, they cried out, “Crucify him, crucify him!” Pilate said to them, “Take him yourselves and crucify him, for I find no guilt in him.” 7 The Jews[a] answered him, “We have a law, and according to that law he ought to die because he has made himself the Son of God.” 8 When Pilate heard this statement, he was even more afraid. 9 He entered his headquarters again and said to Jesus, “Where are you from?” But Jesus gave him no answer. 10 So Pilate said to him, “You will not speak to me? Do you not know that I have authority to release you and authority to crucify you?” 11 Jesus answered him, “You would have no authority over me at all unless it had been given you from above. Therefore he who delivered me over to you has the greater sin.”

12 From then on Pilate sought to release him, but the Jews cried out, “If you release this man, you are not Caesar's friend. Everyone who makes himself a king opposes Caesar.” 13 So when Pilate heard these words, he brought Jesus out and sat down on the judgment seat at a place called The Stone Pavement, and in Aramaic[b] Gabbatha. 14 Now it was the day of Preparation of the Passover. It was about the sixth hour.[c] He said to the Jews, “Behold your King!” 15 They cried out, “Away with him, away with him, crucify him!” Pilate said to them, “Shall I crucify your King?” The chief priests answered, “We have no king but Caesar.” 16 So he delivered him over to them to be crucified.

The Crucifixion
So they took Jesus, 17 and he went out, bearing his own cross, to the place called The Place of a Skull, which in Aramaic is called Golgotha. 18 There they crucified him, and with him two others, one on either side, and Jesus between them. 19 Pilate also wrote an inscription and put it on the cross. It read, “Jesus of Nazareth, the King of the Jews.” 20 Many of the Jews read this inscription, for the place where Jesus was crucified was near the city, and it was written in Aramaic, in Latin, and in Greek. 21 So the chief priests of the Jews said to Pilate, “Do not write, ‘The King of the Jews,’ but rather, ‘This man said, I am King of the Jews.’” 22 Pilate answered, “What I have written I have written.”

23 When the soldiers had crucified Jesus, they took his garments and divided them into four parts, one part for each soldier; also his tunic.[d] But the tunic was seamless, woven in one piece from top to bottom, 24 so they said to one another, “Let us not tear it, but cast lots for it to see whose it shall be.” This was to fulfill the Scripture which says,

“They divided my garments among them,
and for my clothing they cast lots.”
So the soldiers did these things, 25 but standing by the cross of Jesus were his mother and his mother's sister, Mary the wife of Clopas, and Mary Magdalene. 26 When Jesus saw his mother and the disciple whom he loved standing nearby, he said to his mother, “Woman, behold, your son!” 27 Then he said to the disciple, “Behold, your mother!” And from that hour the disciple took her to his own home.

The Death of Jesus

28 After this, Jesus, knowing that all was now finished, said (to fulfill the Scripture), “I thirst.” 29 A jar full of sour wine stood there, so they put a sponge full of the sour wine on a hyssop branch and held it to his mouth. 30 When Jesus had received the sour wine, he said, “It is finished,” and he bowed his head and gave up his spirit.

5) Summary - Read the verse again, and ask what the whole thing means.  Help them come to understanding each time a child asks any question.
This is your chance to make sure they know the wonder of the scripture and the power of God's love, so follow your calling, being a teacher.  The Spirit is within you and with you; Just go with it.