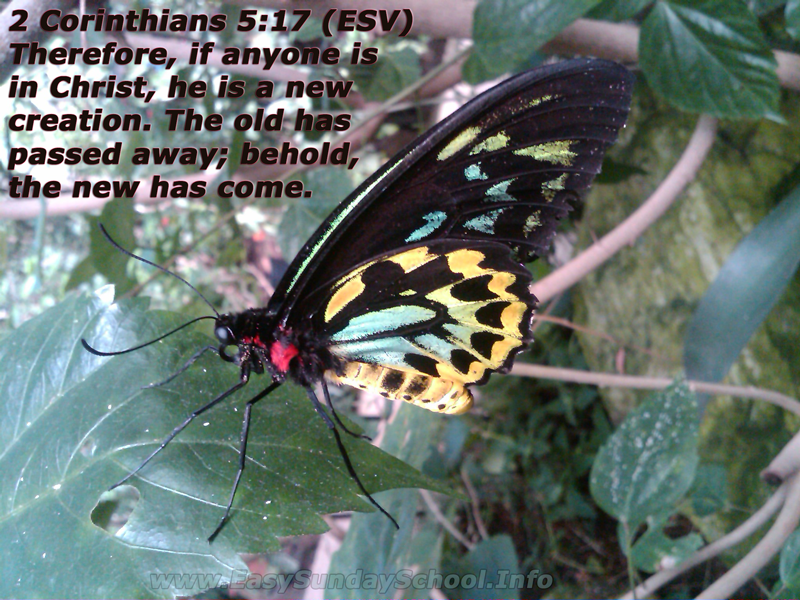 Every child in a Christian Church can tell you that the were saved by the blood or Crucifixion of Jesus the Christ.  However, if you press them, I have found that nearly none of them have even a rudimentary understanding of what that actually means.  This Unit is all about 1 aspect of the Death and Resurrection of Jesus Christ; one result that is secondary to Grace, but powerful in its own right.  We become a new creation, different that we were before we took on the mantel of our savior.  This unit hopefully will bring our children closer to Jesus because they begin to live and understand that they are a NEW CREATION.

Unit Verse: 2 Corinthians 5:17 (ESV) Therefore, if anyone is in Christ, he is a new creation. The old has passed away; behold, the new has come.

Name of Game: Snake in the Grass V2
Equipment:

a) A Soft Ball or a Snake Stuffed animal.  You MUST not use a dodge ball as they HURT to much, and they have a certain expectation in the children's mind.  We don't want that expectation.  competitive Yes.  Violent competitive, NO.

We use 6" Gator Skin Softi Ball-Blue

or any other color, but the brand prevents injury and has longevity at the same time.

b) A teen or an adult monitor to make sure they don't hurt each other and they follow all the rules.

How to Play the Game:
a) One person starts as the Animal - 1 through 6 above, selected by them randomly.  The start with the ball in the middle of the playing area, and take the position and attitude of their animal.  The "Tag" the other children by  throwing the ball at them.  If it hits them in the Air, they are out, and become a snake, or gorilla etc, and are now on the side of the original 1.  If it does not hit them in the air, or it hits something/someone else first, the ball is dead, and anyone can pick it up.  The non animals can run around as people, until the are "Tagged."
b) The game continues until all but one are changed into a NEW ANIMAL. That 1 is the winner, and goes to the Middle of the Floor, after pick a new animal to be.

Why we are Playing the Game – Purpose: We are trying to give them a feeling for what it means to  "CHANGE" into a NEW PERSON.  In this case, the old, human, is gone and the new, animal, is on.  We are going for the visceral feeling of utter definiteness.

Purpose: Teach the students what Changed in Cleopas and his friend when they broke bread with Jesus. Luke 24:13-35(NIV) 13 Now that same day two of them were going to a village called Emmaus, about seven miles from Jerusalem. 14 They were talking with each other about everything that had happened. 15 As they talked and discussed these things with each other, Jesus himself came up and walked along with them; 16 but they were kept from recognizing him.

17 He asked them, “What are you discussing together as you walk along?”

They stood still, their faces downcast. 18 One of them, named Cleopas, asked him, “Are you the only one visiting Jerusalem who does not know the things that have happened there in these days?”

“About Jesus of Nazareth,” they replied. “He was a prophet, powerful in word and deed before God and all the people. 20 The chief priests and our rulers handed him over to be sentenced to death, and they crucified him; 21 but we had hoped that he was the one who was going to redeem Israel. And what is more, it is the third day since all this took place. 22 In addition, some of our women amazed us. They went to the tomb early this morning 23 but didn’t find his body. They came and told us that they had seen a vision of angels, who said he was alive. 24 Then some of our companions went to the tomb and found it just as the women had said, but they did not see Jesus.”

25 He said to them, “How foolish you are, and how slow to believe all that the prophets have spoken! 26 Did not the Messiah have to suffer these things and then enter his glory?” 27 And beginning with Moses and all the Prophets, he explained to them what was said in all the Scriptures concerning himself.

28 As they approached the village to which they were going, Jesus continued on as if he were going farther. 29 But they urged him strongly, “Stay with us, for it is nearly evening; the day is almost over.” So he went in to stay with them.

30 When he was at the table with them, he took bread, gave thanks, broke it and began to give it to them. 31 Then their eyes were opened and they recognized him, and he disappeared from their sight. 32 They asked each other, “Were not our hearts burning within us while he talked with us on the road and opened the Scriptures to us?”

33 They got up and returned at once to Jerusalem. There they found the Eleven and those with them, assembled together 34 and saying, “It is true! The Lord has risen and has appeared to Simon.” 35 Then the two told what had happened on the way, and how Jesus was recognized by them when he broke the bread.

It's important to note that hearing the scriptures, even having them explained, was not enough for the two to "know" Jesus.  They had to break bread with him. I'm not convinced that this is a reference to communion, but I am total certain that they had to invite Jesus into their homes. That is actually in the scripture above.  They had to invite him in as a guest, and when they did, and gave him comfort, as in food and drink, their eyes were open.  To me, this is an allegorical example by the Lord, letting us know that we need to invite him into our lives, if we want to really know him.

2) Two or more somethings to use as blindfolds, depending on the number of teams you have. I use Sport Supply Group Blindfolds

, because the are neat, cool colors, inexpensive and easy to use.  I have, however, used strips of cloth if the people I was doing it for were unable or unwilling to buy blindfolds, and I forgot to bring my own.
3) 14 balloons (if possible 7 of two colors) if you have 2 teams.  More if you have more teams.,
4) A printer to print up a sentence
5) Scissors to Cut up the sentence.

A) First, you need to print up the following verse two times:


2 Corinthians 5:17 "Therefore, if anyone is in Christ, he is a new creation. The old has passed away; behold, the new has come."

2 Corinthians 5:17 "Therefore, if anyone is in Christ, he is a new creation. The old has passed away; behold, the new has come."

B) Take the scissors and cut the sentence in to 7 pieces based on the colors, roll the words up, put them into the balloons, and blow the balloons up. In the end, you should have 7 balloons with 1 sentence fragment each.  If you have 3 teams, and 3 different color balloons, it makes the game easier to manage.  (In later weeks, week 3 and 4, you should have either random colors or all the same color, and make the teams work together to get the verses back together.

D) Tell them the rules and goals of the Drill:

i) The non-blind team members can not leave their side of the room,

ii) The goal is to get all of your team members balloons back to the side of the room that the non-blind members are waiting, pop the balloons, find the slips of paper in the balloons, and figure out what the sentence is.
iii) The Blindfolded student CAN NOT pick up more than one balloon at a time, nor can they take the other teams balloons. If they do, they must return them, before getting more of their own. (In weeks 3 and 4, no such "other team" rules apply.

iv) The team that gets the complete sentence first Wins.

E) Say Go.
4c) Explaining the meaning of the Game: Gather all the students, and start asking questions. You can ask questions based on your observations, but I suggest you ask the following ones too.

1) What does "In Christ" mean. (2 Corinthians 5:17(CEV) - "Anyone who belongs to Christ is a new person. The past is forgotten, and everything is new. - So it means you belong to Christ, you have accepted him, invited him into your life.)

2) Do You Belong to Christ?

3) How Does one invite Christ into their lives?

5) Do you need Jesus or a commitment to him - isn't the Bible good enough all by itself? (No)

5) Building on the Lesson - Read to them Luke 24:13-35  From above.  Just read it through, then focus on the End where they invited Jesus into their homes.

5a) Ask them if they know the difference between knowing about Jesus, like him explaining the scriptures to the two men above, and Knowing Jesus, as when the suddenly recognized him.

5b) Ask them how they can invite Jesus into their lives, so they to can know him.

6) Summary - Remind them that like the game at the beginning, changing is not easy to do.  If you want to Change, become a New Creation, you need to invite Jesus into your life.  Otherwise, you remain the same.

As of the writing of this #EasySundaySchool Lesson Plan, we have written 55 separate lesson plans and over 22002 people have used them.  It is a labor of Love and totally within our gifts.  However, it takes thousands of hours.