Purpose: This is the Christmas Lesson Plans, and it is designed to teach the kids about the HOPE that the birth of Jesus brought into the world, and how it works, so they can both feel the hope and teach the hope to others. 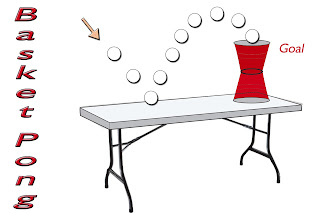 Materials needed:  A Table; one or more ping pong balls, a basket, a cup (like the famous red solo cup) and a small cup like a dixie cup.

How to Play the Game:
1) Have as many children as you have time for, try to bounce a ping pong into the BASKET.  Give them up to three or four tries.  You will find that some get it in, some do not, and nearly never does someone get them all in.  Get the kids to cheer like crazy when one gets in.
1a) When you are done with the basket part, ask them how hard it was.  If they say it was easy, point out that most of the balls did not in fact make it into the basket.  Ask them what THEY could do to make it easier?
1b) Give the basket to a partner of each child, and let them assist by trying to catch the ball with the basket.  This should make the results better.  You might have to show them how first.  When they are done, ask them how hard this was.  Ask them if it was easier with help. Ask them if it is impossible?

2) Replace the basket with a Cup, and repeat the exercise.  You will get that it is much more difficult.  You might have to give them more tries to succeed at all.  When you ask if it is impossible, make sure they get that it is very much harder, but still doable

3) Replace the Cup with a dixie cup.  They should fail.  If by chance they succeed, crush the cup, so they can not succeed.  When you ask them if it is impossible, they should say yes.  Make sure they do.

The you say NO, it is not impossible.  I will change the rules.  Watch.  Have child bounce the ball.  Catch the ball.  Put it in the cup.

Ask them what happened.  They will say you cheated or changed the rules or something like that.  Once you lead them to that answer, say yes, I did change the rules.  That is just what the birth of Jesus did for us.  Before Jesus, there was not hope; it was impossible for us to get to heaven, no matter what we did.  After Jesus, he made it possible.

2 In those days a decree went out from Caesar Augustus that all the world should be registered. 2 This was the first registration when Quirinius was governor of Syria. 3 And all went to be registered, each to his own town. 4 And Joseph also went up from Galilee, from the town of Nazareth, to Judea, to the city of David, which is called Bethlehem, because he was of the house and lineage of David, 5 to be registered with Mary, his betrothed, who was with child. 6 And while they were there, the time came for her to give birth. 7 And she gave birth to her firstborn son and wrapped him in swaddling cloths and laid him in a manger, because there was no place for them in the inn.
The Shepherds and the Angels

8 And in the same region there were shepherds out in the field, keeping watch over their flock by night. 9 And an angel of the Lord appeared to them, and the glory of the Lord shone around them, and they were filled with great fear. 10 And the angel said to them, “Fear not, for behold, I bring you good news of great joy that will be for all the people. 11 For unto you is born this day in the city of David a Savior, who is Christ the Lord. 12 And this will be a sign for you: you will find a baby wrapped in swaddling cloths and lying in a manger.” 13 And suddenly there was with the angel a multitude of the heavenly host praising God and saying,


14 “Glory to God in the highest,
and on earth peace among those with whom he is pleased!”

15 When the angels went away from them into heaven, the shepherds said to one another, “Let us go over to Bethlehem and see this thing that has happened, which the Lord has made known to us.” 16 And they went with haste and found Mary and Joseph, and the baby lying in a manger. 17 And when they saw it, they made known the saying that had been told them concerning this child. 18 And all who heard it wondered at what the shepherds told them. 19 But Mary treasured up all these things, pondering them in her heart. 20 And the shepherds returned, glorifying and praising God for all they had heard and seen, as it had been told them.

21 And at the end of eight days, when he was circumcised, he was called Jesus, the name given by the angel before he was conceived in the womb.


1) Read them the Verse using the team reading method. Have 2 or three adults or helpers who like to act sit in a chair, and select 1 child who can handle re-interpreting the verse.  Have someone who can read well read a line or 2 at a time, and then the people in the chairs take terms retell the line.


3) Tell them what you think of when you read this story.

4) Tell them that every Jew who heard this story had to know that if it was true, that the promise of God had been met, and that Hope had entered the world.  Many rejoiced, because now heaven going to be was possible for them.  Many refused to believe.

Posted by Madd Dawg McCoy at 7:32 PM No comments: Links to this post 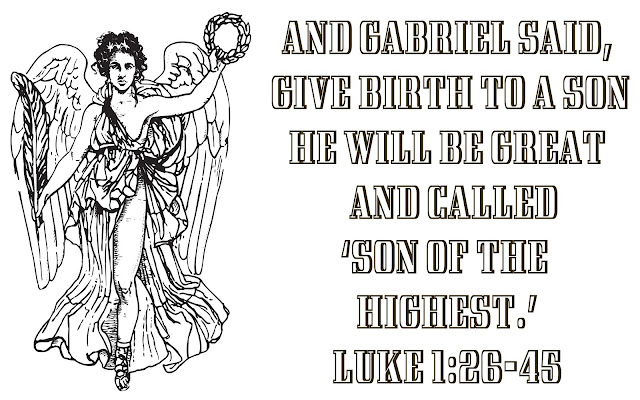 Luke 1:26-45 - (MSG): "In the sixth month of Elizabeth’s pregnancy, God sent the angel Gabriel to the Galilean village of Nazareth to a virgin engaged to be married to a man descended from David. His name was Joseph, and the virgin’s name, Mary. Upon entering, Gabriel greeted her:

Good morning!
You’re beautiful with God’s beauty,
Beautiful inside and out!
God be with you.

She was thoroughly shaken, wondering what was behind a greeting like that. But the angel assured her, “Mary, you have nothing to fear. God has a surprise for you: You will become pregnant and give birth to a son and call his name Jesus.

He will be great,
be called ‘Son of the Highest.’
The Lord God will give him
the throne of his father David;
He will rule Jacob’s house forever—
no end, ever, to his kingdom.”

Mary said to the angel, “But how? I’ve never slept with a man.”

The Holy Spirit will come upon you,
the power of the Highest hover over you;
Therefore, the child you bring to birth
will be called Holy, Son of God.

“And did you know that your cousin Elizabeth conceived a son, old as she is? Everyone called her barren, and here she is six months pregnant! Nothing, you see, is impossible with God.”

Yes, I see it all now:
I’m the Lord’s maid, ready to serve.
Let it be with me
just as you say.
Then the angel left her."
Purpose: This is the Second Lesson in our Christmas Lesson Plans, and it prepares the children for the birth of Jesus, buy telling the story of the Angel Gabriel telling Mary, the mother of Jesus, that she has been picked to be the mother of God. 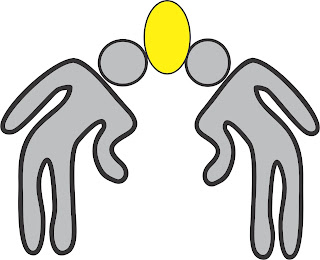 Opening Drill: Balloon Walk Drill - teaching the students what it feels like to trust the others about things they can not see.

Materials needed:  As many balloons as you have or expect to play, pairs of children, and 1 blindfold per team.

How to Play the Game:
1) Give a balloon to one of the team members, and blind fold that team member.  Then tell them that the sighted member needs to guide the blind member toward them.  The object is to put the balloon between their foreheads, and then walk from the starting place to the finish line.  If the balloon falls, the sighted person can not touch it with anything but his forehead, so he has to guide the blind one to pick it up and continue.

2) First one across the finish line wins.

3) Play the game until everyone has played

How to Explain the Game:

Ask them what the key to winning the game is.  You are trying to guide them to say they had to trust their partner and obey his/her words.

Once you get them to this point, then relate the Angel of God to the sighted partner, who is normally a guide.

Ask them how they would feel if an Angel were talking to them.  Would the believe or disbelieve what they were told and told to do?  How would they know if it was a Angel of God? (Holy Spirit)

Tell them that Mary the mother of Jesus was told that she was going to be the mother of God by the Angel Gabriel. Ask what would have happened if she was not courageous and believed?

1) Read them the Verse using the team reading method. Have 2 or three adults or helpers who like to act sit in a chair, and select 1 child who can handle re-interpreting the verse.  Have someone who can read well read a line or 2 at a time, and then the people in the chairs take terms retell the line.

3) Ask them what promises he made about Jesus.  Make sure you mention Son of God, Throne of David, Ruler of the House of Jacob.  Then ask them if that part came true.  (yes)

4) Did she agree to follow the word of the Lord.

If you have time, download the 1/2 page cards shown at the top of the lesson plan, cut them into enough 1/2 page cards for every student, and have them color them.  Download cards by clicking here.
Posted by Madd Dawg McCoy at 10:27 PM No comments: Links to this post