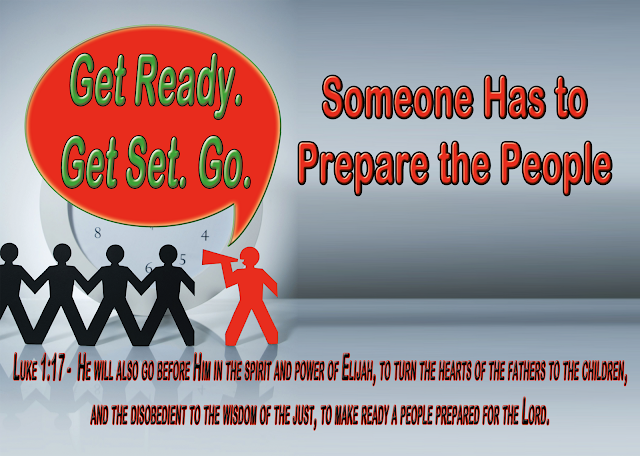 Luke 1:5-25 - (NKJV) "There was in the days of Herod, the king of Judea, a certain priest named Zacharias, of the division of Abijah. His wife was of the daughters of Aaron, and her name wasElizabeth.  And they were both righteous before God, walking in all the commandments and ordinances of the Lord blameless.  But they had no child, because Elizabeth was barren, and they were both well advanced in years.

So it was, that while he was serving as priest before God in the order of his division, according to the custom of the priesthood, his lot fell to burn incense when he went into the temple of the Lord.  And the whole multitude of the people was praying outside at the hour of incense.  Then an angel of the Lord appeared to him, standing on the right side of the altar of incense.  And when Zacharias saw him, he was troubled, and fear fell upon him.

But the angel said to him, “Do not be afraid, Zacharias, for your prayer is heard; and your wife Elizabeth will bear you a son, and you shall call his name John.  And you will have joy and gladness, and many will rejoice at his birth. For he will be great in the sight of the Lord, and shall drink neither wine nor strong drink. He will also be filled with the Holy Spirit, even from his mother’s womb. And he will turn many of the children of Israel to the Lord their God. He will also go before Him in the spirit and power of Elijah, ‘to turn the hearts of the fathers to the children,’ and the disobedient to the wisdom of the just, to make ready a people prepared for the Lord.”

And Zacharias said to the angel, “How shall I know this? For I am an old man, and my wife is well advanced in years.”

And the angel answered and said to him, “I am Gabriel, who stands in the presence of God, and was sent to speak to you and bring you these glad tidings. But behold, you will be mute and not able to speak until the day these things take place, because you did not believe my words which will be fulfilled in their own time.”

And the people waited for Zacharias, and marveled that he lingered so long in the temple. But when he came out, he could not speak to them; and they perceived that he had seen a vision in the temple, for he beckoned to them and remained speechless.

So it was, as soon as the days of his service were completed, that he departed to his own house. Now after those days his wife Elizabeth conceived; and she hid herself five months, saying, “Thus the Lord has dealt with me, in the days when He looked on me,to take away my reproach among people.”

Purpose: This is the First Lesson in our Christmas Lesson Plans, and it prepares the children for the birth of Jesus, buy telling the story of John The Baptists birth and his mission to prepare the way for Jesus' birth too.

Opening Drill: Balloon toss Game: Have them experience the benefits of being Prepared by teaching them how to "win" a game before the play the game.


Materials needed:  As many balloons as you have or expect to play, pairs of children.

How to Play the Game:
1) Have half the class, or 1/2 of the people playing the game, leave the room, or go to some place where they will not hear the rules or get to practice.  When 1/2 are prepared, bring the other half back.

3) You need to make sure the prepared group knows how to pass the balloon and play them game. This is how the game is played. "Two children face each other, and toss, slap, punch the balloon to their partner. The partner catches it, and steps back.  Then repeat the process until the balloon hits the ground, or the person catching it has to move FORWARD to catch it.  The one who is still playing wins."

How to Explain the Game:

Ask them who won, and why.  If the ones who were not prepared won, ask them how they knew how to play.

Once they have established that knowing how to play, and what the rules are, ask them how it feels to be prepared.

Ask them what else they might want to be prepared for. Lead them to the answer as everything.

1) Read them the Verse using the team reading method. Have 2 or three adults or helpers who like to act sit in a chair, and select 1 child who can handle re-interpreting the verse.  Have someone who can read well read a line or 2 at a time, and then the people in the chairs take terms retell the line.

3) Ask them how John prepared the people for Jesus coming.

4) Ask about any miracles they heard about in the verse. Then ask them why there were any to begin with. (God is directly involved with John's life.)

If you have time replay the game with everyone being prepared.  With each winner, have them scream, "Prepare the People for Victory."

We print up postcards, or purchase them from www.GoodJobNotes.com, and give them to the winners.  If you want to download them for free, you can get them by clicking Here.
Posted by Madd Dawg McCoy at 10:15 PM