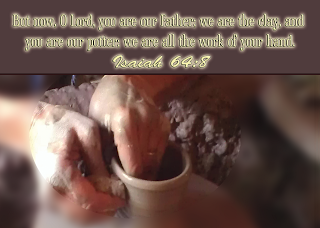 The Purpose of of this lesson plan is to teach your students what clay is, what it means to be a potter, and what it means to us and others to be clay, without abandoning free will or salvation.

There are many verses in the bible that reference the potter's hands, and the one we are teaching in this lesson plan is Romans 9:21 - "Has the potter no right over the clay, to make out of the same lump one vessel for honorable use and another for dishonorable use?" - (ESV) 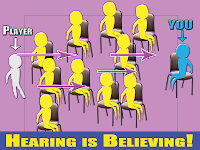 The class starts with a simple game of follow the leader, that we have used several times in these lesson plans, and that both children and adults seem to love to play.  You do not need to control the outcome, as any outcome is just as good as another.  This game requires that you have a blind fold and that you set up chairs as obstacles for student to negotiate.  You will also need one chair on one side of the room and another chair on the other side of the room.

They are likely to ask questions like: "can we get up?" or "can I grab them?"   Tell them the game has already started.  Most likely they will follow rules they use in other games, but sometimes the sighted one gets up and drags the other one over.  I have even seen the blind one fight the help.  Whatever happens, it is good for the lesson.

Teaching with the Game:

Ask them what happened in the several games that were played, and how it went.  Ask what they could do to make it better, and finally, ask who the helper was and who the helped was.  Then explain that God is like the sighted one in the game, and knows everything, and wants what is best for us.  That we just have to do what is asked of us.  To follow God.

I then lead the class is prayer thanking God for his Love an constant help and grace, and ask that we all be given ears to hear and eyes to see what He wants us to do.

This section is where we teach them the power of music, the meaning of the songs, and how to pray with others.  We also pray for and take an offering. (This is where I told a story of going to Old Sturbridge Village in MA, where the 19th century actor was making pots to be used on the farm.  There was a 8 year old child right up front, and she asked the potter, "why are you making such boring pots?"  He told here that he made pots for specific reasons, and all his pots were for farmers, so they were inexpensive and easy to make.  He also told her that the potters in his time had to decide what the purpose was long before hand, because they were very busy.  Once I told them this story, I asked them it that made sense?  It did, so then I asked them if the clay had any say in what it was going to be made into?  We then played with Play doh.)

You can make your own play-doh, but my experience is that the brand name actually creates excitement, and they already know how to do it.

We set a few tables out, in our case flat on the ground without the legs out, to make it easier to clean afterward.  We break the kids up into 5 teams and have them make 1 or 2 things.  If they make 2, one of them has to be alive, like a person or animal.

When then give them some time to make whatever they are going to make.  Resist the urge to teach them how to be artists, and just let them go.  It is important that THEY, not we, control the clay.

When they have had enough time, then have each group move their creation(s) and interact with each of the other creations, without destroying any of them.  For example, we had a dog pretend to eat a hotdog. Move the groups along, so it does not take to much time, and when it is done, you will ask them some questions about the nature of being a creation made of clay.

For example, I suggest you ask them:

Once I had them understanding the nature of clay, I read to them "Has the potter no right over the clay, to make out of the same lump one vessel for honorable use and another for dishonorable use?"

Before I launch into my adult explanation, I ask them about the verse, starting with the first part, Has the potter not right over the clay.  I ask them if they had right over the clay they were playing with, or did the clay complain about being clay or being a dog etc.  Once they talk that out, I explain that we are God's clay.  I then read the next part, and ask them what it means.  This verse has caused considerable disagreement within the body of Christ, so I suggest that you ask you Pastor what your churches doctrine is if you are unsure of its meaning.  I also suggest you pray about it.  I believe that it means that God uses us as we are and have become.  Just because he knows what we are going to do, since he lives outside of time, does not mean we do not have the right to pick our behavior.  If he uses some of us to preach, some to teach, some to heal and some to be the people the faithful must overcome, that is his will.  For example, I do not believe that Pharaoh was, the day he was born, destined to be killed under the Red Sea, so as to create a moment for God's Glory.  I do believe that God has the power and the right to use Pharaoh as anything he wants, and once Pharaoh had picked what he was going to believe, who he was going to follow, the potter, God, picked him for an example.