God Will Always be There - Paul on Malta

Purpose:  To Teach about Having Confidence in The Lord, even if you Do Not Understand
What is happening, what could happen or even if you doubt anything will happen.

Primary Scripture:  Acts 28: 1 -5 Paul on Malta "After we were brought safely through, we then learned that the island was called Malta. The native people showed us unusual kindness, for they kindled a fire and welcomed us all, because it had begun to rain and was cold. When Paul had gathered a bundle of sticks and put them on the fire, a viper came out because of the heat and fastened on his hand. When the native people saw the creature hanging from his hand, they said to one another, “No doubt this man is a murderer. Though he has escaped from the sea, Justice has not allowed him to live.” He, however, shook off the creature into the fire and suffered no harm."

Opening Drill: "It will Work Out - Surprise" 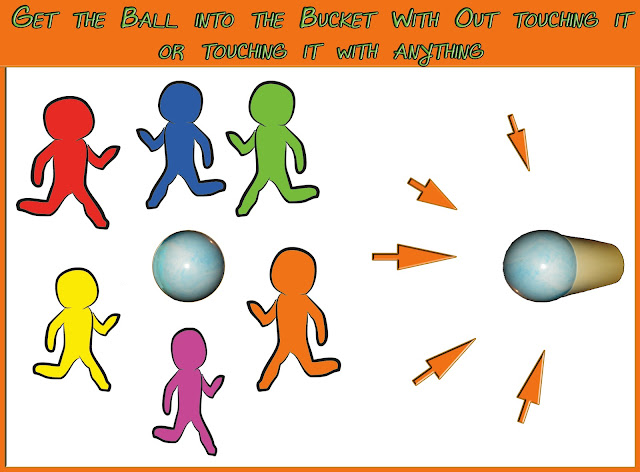 Equipment Needed: Children, at least on assistant, a ball, some sort of bucket or box.

Tell a group of children you need a leader from the group, and have them decide ... give them 30 seconds or so, and then select one for them. Then tell the whole group:
1) That if they believe in the Leader, they WILL Win.
2) Tell the leader his/her goal is to get the ball from one side of the room to the other, and into the container, and they can not touch the ball, or touch the ball with anything.
3) Tell the followers that if at anytime they doubt the leader, all they have to do is yell out that it will not work.

Ask if they have any questions.  Answer them from the above information ONLY.  You really are not trying to get them to understand, you just want to make sure they think everything is fair.

Say Go.  Stop them if they touch the ball with anything. If you stop them, get a new group to try to win.

Tell your assistant that at anytime after 60 seconds, they can rush to the ball, pick it up, and bring it to the container, and put it into the container, then go sit down, as if nothing has happened.  Ask the assistant to Go at anytime, but it would be even better if at some point, they waited for a team member to give up.  You want to make sure that they have NO idea what the team member is using to help them.  He just does.  HE CAN NOT HELP THEM IF THE LEADER GIVES UP.  IF THE LEADER GIVE UP, THE GAME IS OVER.

Explaining the meaning of the Game:

Ask them if they know what caused the assistant to help them?  Let them guess a ton of things.  After a while, let them know that the assistant only helped if the Leader never gave up, and he helped because we said that they would win if they believed.

Tell them that God is like that too.  Often, we wait a long time, and assume that God never has, will or is showing up, yet he always does.  Sometimes, his help is NOT what we expect, but he always keeps his word, and he has told us that "all things work together for those who love the Lord, and are called according to his purpose."

Setting up the Story: (Tell them this before you read the verse - show them the boat picture)

Tell them all about Paul being shipped wrecked, with over 200 people on a Roman ship, and how everyone made it to shore.  Remind them that Paul was telling them the whole time that it was going to work out.

Before your read them the bible verse, read them or tell them this Joke, so that they understand that God's help is not always obvious, if you do not keep your eyes open and faith alive.

A man is on top of a roof during a flood. A man comes by in a canoe and says "get in, get in!" The man on the roof replies, " no I have faith in God, he will save me."

Later, the water is up to his waist and a row boat comes by and the guy tells him to get in. He responds that he has faith in God and God will give will save him. With the water at about chest high, another motor boat comes to rescue him, but he turns down the offer again because "God will rescue him."

With the man starting to tread water on the roof, a helicopter throws down a ladder and they tell him to climb the ladder, but he again turns down the request for help because God will rescue him.

He dies, and when he reaches Heaven, he tells Jesus,  "I thought you were going to rescue me." Jesus says, "I don't know what you're complaining about, we sent you three boats and a helicopter."

God always keeps his word.  They questions is never will God show up, but will you believe it when you see it.

Acts 28: 1 -5 Paul on Malta above. Take your time to explain the words and the feelings, asking them to relate it to the game you played earlier.

Making it Real:
Ask any or all of these questions
1) How did they end up on the Island with the natives on it?
2) Where did the people come from?  They are likely to say "Jesus" or "God".  If they do, ask them  When God put them there?  The real issue is that God knew the generations before Paul was even born.  (Good time to talk about "All Knowing.")
3) What is a Viper.
4) Why didn't the Viper Kill Paul?  (Sometimes God works long before we need him, and sometimes he helps RIGHT NOW.)
5) Why didn't Paul Freak Out when he was bitten

What do I do if I Have too Much Time for This Lesson?
Do a Balloon pass version of a Sword fight, and give a small reward, like a sticker, a food item, anything, to each student who gives an answer.  Play it like musical chairs, only that they pass a balloon in the air when the music is playing.  When it stops, whoever has the balloon has a chance to give you a bible verse.  If they do, they win the reward.  Start again.
Posted by Madd Dawg McCoy at 7:29 PM

Email ThisBlogThis!Share to TwitterShare to FacebookShare to Pinterest
Labels: Acts 28, All things work together, Confidence in the Lord, God, Malta, Miracle, Miracles, Paul