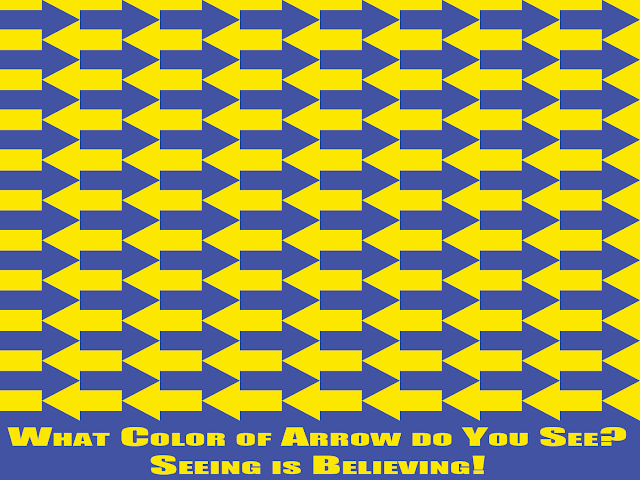 1) Setting The Children Up to See The Glory of The Lord - Game #1 ARE YOU PAYING ATTENTION.
What you need to Play the Game:
a) A Reward: you can give to the children who win the game - the number is up to you, based on the number of times you play the game.  I suggest something small, like stickers or even food items.  Be careful about food items due to food allergies. We don't let the children eat anything before they show it to their parents, for example.
b) 2 Groups of Children: - those who will have their memory tested, and those who will be the test.  I do NOT pick the students before hand.  This gives me more latitude based on their responses to the drill (game), but organization will allow you to move along more easily.  Either way is good.
How to Play the Game:
a) The Test:  Pick a child to go outside the room (make sure you have supervision for this child), or away from the view of the other children, and when they are hidden or out of site. (If I am short of supervision, I just have the child stand behind the other children.
b) The Questions: - Once you have done part A above, then ask one of the following questions of a child or children to test their "Seeing" ability. (Memory based on sight.)
What Color Shoes was the Test Child wearing?
What Color Hair was the Test Child's?
What Color Pants (skirt dress) was the Test Child wearing?
What Color Shirt was the Test Child wearing?
What Color Socks was the Test Child wearing?
What Jewelry was the Test Child wearing?
What Color Hat was the Test Child wearing? (even if they did not have a hat)
Ask the questions in random order.  You can ask 1 or more, but I suggest 1 per child, so more children can be the test child, and more can guess (remember.)
The Meaning of the Game:
Once you have finished the game, ask the children how well they did in remembering what their eyes saw.  Tell them that even though they SAW everything, most people still have a tough time remembering it. Now imagine how your memory would be, if what you were being asked to believe was NOT visible, or worse yet, what you saw was different or seemed different that what you were told.
At this point, show them the picture of the arrows above, and ask them what color arrow they see first? Then ask them what color arrow it really is?  Then ask them if they say yellow, does that mean that there are NO BLUE arrow?
Sometimes God is just like that - review the story of Moses and the 40 years, below, quickly.
When Joshua and Caleb returned from scouting out the land that the Lord had just given them, in Numbers 13, all the other spies that were sent into the promise land want to run away, thinking that what they SAW, giants and well armored cities, was what they should believe.
However, Caleb and Joshua wanted to believe what they saw, a land flowing with milk and honey, and they wanted to believe what they heard from Moses and the Lord.  They wanted to go into the land and occupy it as they were told.
In Numbers 13:31-33 But the others said, "We can't attack those people; they're way stronger than we are." They spread scary rumors among the People of Israel. They said, "We scouted out the land from one end to the other—it's a land that swallows people whole. Everybody we saw was huge. Why, we even saw the Nephilim giants (the Anak giants come from the Nephilim). Alongside them we felt like grasshoppers. And they looked down on us as if we were grasshoppers."
So the people refused to go into the promised land, and the Lord our God sent them back into the desert for 40 years, until the next generation of people were in charge, and they were once again on the shore of the River Jordan ready to go in and take the Land.
Just like the yellow and blue arrows, they saw one thing, giant dangerous people, and not the other thing, a Big and Powerful God.
------------------------------------------------------------------------
The second section of our class is Praise/Worship music for children, and offering, but this section is NOT required.
------------------------------------------------------------------------ 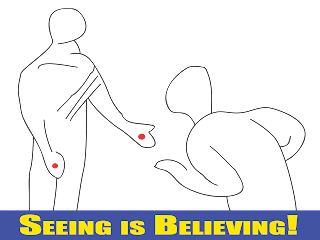 The third section of the Lesson is teaching them about Why Jesus walked the Earth after his Resurrection: To Prove the Point that he was who he said he was, the son of God, and so that WE would have a memorial (the Bible) of the event, so we can Believe and Spread the Good News.
Read to the students

John 20:19-31 (MSG):  Later on that day, the disciples had gathered together, but, fearful of the Jews, had locked all the doors in the house. Jesus entered, stood among them, and said, "Peace to you." Then he showed them his hands and side.

The disciples, seeing the Master with their own eyes, were exuberant. Jesus repeated his greeting: "Peace to you. Just as the Father sent me, I send you."

Then he took a deep breath and breathed into them. "Receive the Holy Spirit," he said. "If you forgive someone's sins, they're gone for good. If you don't forgive sins, what are you going to do with them?"

But Thomas, sometimes called the Twin, one of the Twelve, was not with them when Jesus came. The other disciples told him, "We saw the Master."

But he said, "Unless I see the nail holes in his hands, put my finger in the nail holes, and stick my hand in his side, I won't believe it."

Eight days later, his disciples were again in the room. This time Thomas was with them. Jesus came through the locked doors, stood among them, and said, "Peace to you."

Then he focused his attention on Thomas. "Take your finger and examine my hands. Take your hand and stick it in my side. Don't be unbelieving. Believe."

Jesus said, "So, you believe because you've seen with your own eyes. Even better blessings are in store for those who believe without seeing." 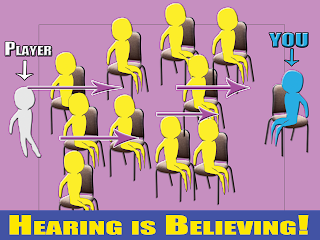 Follow my Voice:
Have the majority of the students sitting in chairs, if possible, for safeties sake, spread across the center of the room, and have one student blind folded on one side, while a "caller" was sitting on the other side (you are the caller).
The Player is blindfolded, and follows you voice to the other side - the hear the truth about what to do to get across the room - from you, and it is up to them to Believe, to follow, and to understand or ask questions.
The Meaning of the Game:
Ask them if they know what there are supposed to Hear, who they are supposed to lead, and where were they are going?  You can even ask them who the people in they way might be.  There is no correct answer for that, since almost any thing that gets in the way is something they need to watch out for.
Posted by Madd Dawg McCoy at 10:16 PM