Prayer and Submission to the Will of the Lord - Psalm 95:6

Pray: Pray a prayer with your students asking that YOU are given the words you need to change their life, and asking THEM to learn how to submit to the Lord.

Equipment Needed: Foam Noodle used as a "SWORD"
A Teacher (You), A Throne (A Chair), and Peasant (Student)
How to play the game.  Select as many students as you have time for for this introductory game: The rules are simple.  You sit on the Throne, they kneel on both knees within reach of you, and bow their head, eyes open.  You swing the "Sword" at their head. (As redundant as it seems to teachers, make sure you have both selected children who will not panic and decompress if the get "hit" by a noodle, and make sure the you "hit" them with nearly 0 force.  I would suggest the shoulders rather than the head.)
You give them 5 tries to get out of range when you swing the sword at them.  Every time the escape, they get a point. Give them something for each point.  (We use coins, which can be exchanged for something else.  If you want more information of the coin program, ask in the comments and I will detail it.)
Teaching the Point:  Ask them how often the students got away.  Make sure you did NOT let them get away very much, or at all. (I reward them for playing at all, when the illustration is designed to be a no win type of illustration.)
When you are done, relate the when we "kneel" to pray, we are reminding ourselves that we are not just following some ancient rule of prayer, but we are literally saying to our king, our Lord, that he can do whatever he wants to us, and we not only can not escape it, we do not wish to.
The Israeli culture was a warrior culture from start to finish.  They had spent most of their recent history fighting for their land and lives against neighbors and even themselves.  Their citizens were numbered as adult males who could carry a sword.
When a warrior culture, at that time, or even in the middle ages in the west, or Roman culture, Kneeling in front of the "King" was a physical act, where you were unarmed, as they took your weapons from you when you entered his presence.
You knelt on one or two knees in front of the King, making it impossible for you to even move quickly, and you made your case.  In this position, either the ruler or his soldiers could literally cut your head off before you could get up and run.
So, when you kneel, you submit physically to the king.
In Prayer, we do the same thing.
------------------------------------------
Introduction to the Class is over - we sing and do an offering at this point, but whatever procedure you have is adaptable to this format.
------------------------------------------
Only the Penitent Man Shall Pass - Illustration Game 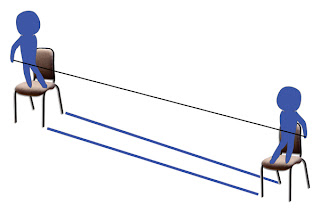 Equipment Needed:
1) Rope long and heavy enough to use as a "jump rope."
2) 2 Chairs or the like strong enough for two teachers, helpers or whomever you can use to stand on.
3) Students
4) Painter Tape or cones or something to make a path of ten feet or so between the two chairs.


How to Play the Game:


Tell the students they have to step between the blue lines in front of one chair, and make it to the other chair without the rope hitting them.  Let someone walk under the rope doing whatever they need to in order to not touch the rope.


Then ask them, does anyone have a question about how to play?


When they do not have any questions, ask who wants to be first, then start swinging the rope rather fast like a jump rope, making sure that if the duck or go to their knees, they can make it.


If someone figures it out, fast enough for the time that you have, then you are done.  If not, tell them if they stay on their knees, or stay bowed down, they can make it.  Have someone do it.


Explain the drill:  Just like when we started class, this drill is designed to have you bow or kneel.  God is just like that.  Remember how we started class.  You submit to the will of God, you bow down, and you pray kneeling or bowing your head, to remind yourself that you are actually giving control of your very life to God as an act of worship when you pray.


Ask for questions or explainations, and reward participation somehow, either with verbal or physical recognition.


If you have time, ask students to lead the others in Kneeling prayer, out loud.  Reward participation the same way.


- Remember always, God Rocks, and as a teacher, of his young, he has your back.  You should submit to his will at the beginning, with your helpers, just to make sure he knows you know who the man really is.
Posted by Madd Dawg McCoy at 10:22 PM